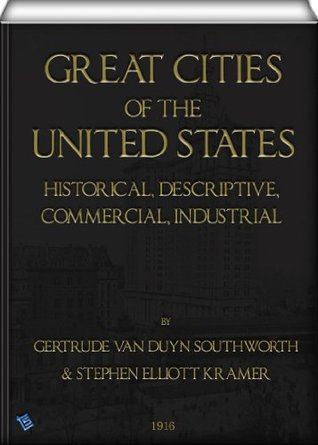 How much more easily history is grasped and remembered when grouped around attractive biographies. With great cities as the centers of geography-study, what is generally considered a dry, matter-of-fact subject can be made to attract, to inspire, and to fix the things which should be remembered.

This book, “Great Cities of the United States,” includes the ten largest cities of this country, together with San Francisco, New Orleans, and Washington. In it the important facts of our country's geography have been grouped around these thirteen cities. The story of Chicago includes the story of farming in the Middle West, of the great ore industry on and around the Great Lakes, and of the varied means of transportation. Cotton, sugar, and location are shown to account largely for the greatness of New Orleans. In a similar way, the stories of the other cities sum up the important geography of our country.

Enough of the history of each city is given to show its growth and development. The distinctive points of interest are described so that one feels acquainted with the things which attract the sight-seer. The commercial and industrial features are made to stand out as the logical sequence of fortunate location for manufacturing, for securing raw materials, for markets, and for convenient means of transportation.

In order to make uniformly fair comparisons, local statistics have been ignored and all data have been taken from the latest government reports.

The authors wish to express their sincere appreciation to the historical societies, to the chambers of commerce, to those in the various cities who have furnished material and reviewed the manuscript, and to all others who have rendered assistance.

It is hoped that by the use of this book our country, in all its greatness, will mean more and will appeal more to the boys and girls of America than ever before.

To the publishers of Allen's “Geographical and Industrial Studies: United States” we are indebted for the use of the map appearing at the end of the text.