ON LABORATORY ARTS WITH ILLUSTRATED (Illustrated): BY RICHARD THRELFALL, M.A. PROFESSOR OF PHYSICS IN THE UNIVERSITY OF SYDNEY; MEMBER OF THE INSTITUTE OF ELECTRICAL ENGINEERS 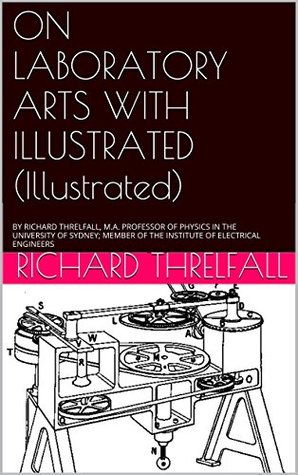 PROFESSOR OF PHYSICS IN THE UNIVERSITY OF SYDNEY;

MEMBER OF THE INSTITUTE OF ELECTRICAL ENGINEERS;

ASSOCIATE-MEMBER OF THE INSTITUTE OF CIVIL ENGINEERS;

MEMBER OF THE PHYSICAL SOCIETY

EXPERIMENTAL work in physical science rests ultimately upon the mechanical arts. It is true that in a well-appointed laboratory, where apparatus is collected together in greater or less profusion, the appeal is often very indirect, and to a student carrying out a set experiment with apparatus provided to his hand, the temptation to ignore the mechanical basis of his work is often irresistible.

It often happens that young physicists are to be found whose mathematical attainments are adequate, whose observational powers are perfectly trained, and whose general capacity is unquestioned, but who are quite unable to design or construct the simplest apparatus with due regard to the facility with which it ought to be constructed. That ultimate knowledge of materials and of processes which by long experience becomes intuitive in the mind of a great inventor of course cannot be acquired from books or from any set course of instruction.

There are, however, many steps between absolute ignorance and consummate knowledge of the mechanical arts, and it is the object of the following pages to assist the young physicist in making his first steps towards acquiring a working knowledge of "laboratory arts." However humble the ambition may be, no one can be more keenly alive than the writer to the inadequacy of his attempt; and it is only from a profound sense of the necessity which exists for some beginning to be made, that he has had the courage to air his views on matters about which there are probably hundreds or thousands of people whose knowledge is superior to his own.

Moreover, nothing has been further from the writer's mind than any idea of "instructing" any one; his desire is — if happily it may so befall — to be of assistance, especially to young physicists or inventors who wish to attain definite mechanical ends with the minimum expenditure of time. Most people will agree that one condition essential to success in such an undertaking is brevity, and it is for this reason that alternative methods as a rule have not been given, which, of course, deprives the book of any pretence to being a "treatise." The writer, therefore, is responsible for exercising a certain amount of discretion in the selection he has made, and it is hardly to be hoped that he has in all — or even in the majority of cases — succeeded in recommending absolutely the best method of procedure.

This brings another point into view. Before all things the means indicated must be definite and reliable. It is for this reason that the writer has practically confined himself to matters lying within his own immediate experience, and has never recommended any process (with one or two minor exceptions, which he has noted) which he has not actually and personally carried through to a successful issue. This, although it is a matter which he considers of the highest importance, and which is his only title to a hearing, has unfortunately led to a very personal tone in the book.

With regard to the arts treated of in the following pages, matters about which information is easily acquired — such as carpentering, blacksmithing, turning, and the arts of the watchmaker — have been left on one side.