Giants in The Earth: Amazing Suppressed Archeological Evidence Proves They Once Existed 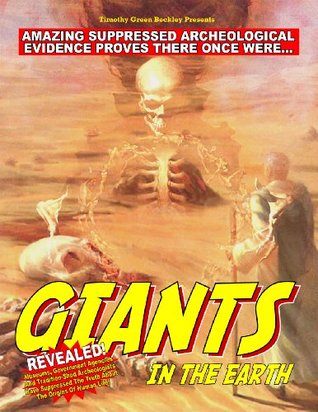 REVEALED! MUSEUMS, GOVERNMENT AGENCIES AND TRADITIONAL ARCHEOLOGISTS HAVE SUPPRESSED THE TRUTH ABOUT THE ORIGINS OF HUMAN LIFE! . . . A VERY IMPORTANT WORK JUST COMPLETED - DOZENS OF YEARS IN THE MAKING . . . MANY EXPERTS CONSULTED - - - TOP RESEARCHERS PROCLAIM GIANTS ONCE EXISTED! DINOSAURS ARE NOT EXTINCT!

Is the Smithsonian Institute As Well As Other Academic Foundations Withholding The Biggest Archaeological News Of Our Time? Is there a single, solid, scientific reason they would NOT want you to know that giants -some as tall as 15 feet- once roamed the earth, lived amongst us and mated with human women?

Why would they want to suppress the FACT that humans not only lived during the age of dinosaurs and pterosaurs, but that giants inhabited the planet right along side both beast and Homo Sapiens?

Furthermore, why are we not shown the abundance of EVIDENCE concerning the reality of giants in the form of massive bones, body armor and weapons which have been collected worldwide?

Did giants take humans as their slaves? Are they still "in hiding" on Earth? Did they grow up right along side of us, invisible to normal sized people? Did they descend from the sky? Climb up from the underworld? And if they are from "somewhere else" will they return, as some students of prophecy predict? Here is a non-theological approach to a mystifying topic that will astound and fascinate the reader.

YES THERE WERE GIANTS ON THE EARTH! . . . Challenges Darwin and proclaims that dragons and dinosaurs still roam the earth! Learn how the environment that allowed them to survive and humans to live for over 900 years has changed radically since the time of the flood.

Bones of the giants fifteen feet tall have been uncovered And there is also the armor and the weapons which have been collected from far and wide. Where did these giants come from? Were they bred on earth? Did they come from a vast underworld that exists beneath our feet? Or is it possible they came straight down out of the sky, down from Heaven above?

Many students of what we might label freaks of nature or human oddities strongly contend that these giants, referred to as the Nephilim in the Bible, were actually fallen beings who defied God and were cast down to earth.

Others have speculated that the Nephilim left the Earth and could be returning shortly to take us as slaves (possible in 2012?), or they may be landing in great numbers in the Promised Land as characterized by Israel's top UFO investigator Barry Chamish. The astute researcher/author notes the most recent sightings of giants emerging from UFOs in the Middle East. To him this signals the return of the exceedingly tall beings known as the Anakim or the Refaim, the giants most often described in Scripture.

As a further example, take this quote from the Secrets of Enoch, The Book of Watchers: The men (literally angels) took me to the fifth heaven and placed me, and there I saw many and countless soldiers, called Grigori (rebellious angels), of human appearance, and their size was greater than that of great giants.